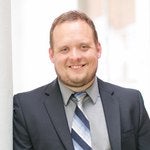 Michael T. Trent is an experienced attorney with an active practice focusing primarily on litigation, especially criminal defense and personal injury. He is a son of our Southside Virginia community and his love for this area runs deep with his growing up in Charlotte County and the vast majority of his family having called all different parts of Southside home for generations.

After graduating with a Bachelor of Arts in Political Science from Lynchburg College, Mike received his Juris Doctorate from Suffolk University Law School in Boston, Massachusetts. He then decided to come home to Southside, and began working as an Assistant Public Defender here in Halifax County. At the PD's office, he focused at different times on both Halifax and Mecklenburg Counties, until starting the Trent Law Practice with his wonderful wife Blair at the beginning of 2015. Now, he loves combining his training and experience with his devotion to this area in offering quality legal representation.

In addition to his dedication to the practice of law, Mike is just as dedicated to serving our community in all sorts of other ways. Over the years, he has regularly volunteered as a coach in local youth sports, been involved in the granting of scholarships for our young people, served as President of the Halifax County Bar Association, and been involved with local civic organizations such as the Lions Club and t he Halifax Village Association, where he has received the Melvin Jones Fellowship Aware.

In 2015 Mike was appointed to finish an unexpired term on the Halifax Town Council, earning re-election to represent the town in 2016 and 2020. He is an active member of St. John's Episcopal Church here in the Town of Halifax, where he has previously served on the Vestry. With all of that said, Mike's favorite role is that of father to the two best little guys the world has ever seen!

Thank you for contacting us. We will get back to you shortly.

Please complete all required fields below.

We'll gladly discuss your case with you at your convenience. Contact us today to schedule an appointment.